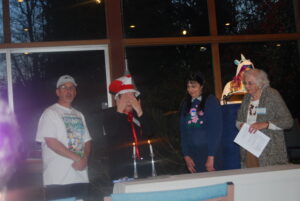 Purim is celebrated with a public reading—usually in the synagogue—of the Book of Esther (Megillat Esther), which tells the story of the holiday. Under the rule of King Ahashverosh, Haman, the king’s prime minister, plots to exterminate all of the Jews of Persia. His plan is foiled by Queen Esther and her cousin Mordechai, who ultimately save the Jews of Persia from destruction. The reading of the megillah typically is a rowdy affair, punctuated by booing and noise-making when Haman’s name is read aloud.

Purim is an unusual holiday in many respects. First, Esther is the only biblical book in which God is not mentioned. Second, Purim, like Hanukkah, traditionally is viewed as a minor festival, but elevated to a major holiday as a result of the Jewish historical experience. Over the centuries, Haman became the embodiment of every anti-Semite in every land where Jews were oppressed. The significance of Purim lies not so much in how it began, but in what it has become: a thankful and joyous affirmation of Jewish survival against all odds.

In the Book of Esther, we read that Purim is a time for “feasting and merrymaking,” as well as for “sending gifts to one another and presents to the poor” (Esther 9:22). In addition to reading the M’gillah (Book of Esther), celebrants dress in costumes, have festive parties, perform “Purim-spiels,” silly theatrical adaptations of the story of the M’gillah, send baskets of food (mishloach manot) to friends, and give gifts to the poor (matanot l’evyonim).

Hamantaschen (Yiddish for Haman’s pockets) are three-cornered pastries filled with poppy seeds (mohn in Yiddish), fruit preserves, chocolate, or other ingredients that are traditionally eaten on Purim.  In Israel during the weeks leading up to Purim, the aroma of freshly baked hamantaschen can be smelled on every block. Their triangular shape is thought to be be reminiscent of Haman’s hat or ears.
====================

Hamantash is also spelled hamentasch, homentash, homentasch, homentaschan, or even (h)umentash. The name hamantash is commonly viewed as a reference to Haman, the villain of Purim, as described in the Book of Esther. The pastries are supposed to symbolize the defeated enemy of the Jewish people.[2] The word tasche means “pouch” or “pocket” in German, and thus may refer to Haman’s pockets, symbolizing the money that Haman offered to Ahasuerus in exchange for permission to destroy the Jews. In Hebrew, tash means “weaken”, and the hamantash may celebrate the weakening of Haman and the hope that God will weaken all of the enemies of the Jews.[3] Another possible source of the name is a folk etymology: the original Yiddish word מאָן־טאַשן (montashn) or the German word Mohntaschen, both meaning poppyseed-filled pouches,[4] was transformed to hamantaschen, likely by association with Haman. In Israel, hamantaschen are called oznei Haman(Hebrew: אוזני המן‎), Hebrew for “Haman’s ears” in reference to their defeated enemy’s ears.

The reason for the three-sided shape is uncertain. There is an old legend that Haman wore a three-cornered hat.[5] Alternatively, the Midrash says that when Haman recognized the merit of the Three Patriarchs, his strength immediately weakened.[3] Naked Archaeologist documentarian Simcha Jacobovici has shown the resemblance of hamantaschen to dice from the ancient Babylonian Royal Game of Ur, thus suggesting that the pastries are meant to symbolize the pyramidal shape of the dice cast by Haman in determining the day of destruction for the Jews.[6]