July 13, 2018 By carmi brooks in Uncategorized No Comments 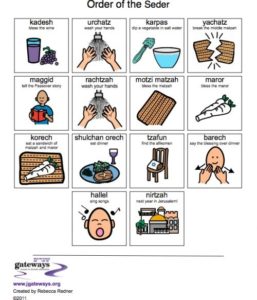 Passover is one of the most popular Jewish holidays. One way we celebrate is by going to a very special dinner party called a Seder. We read a script from a book called a Haggadah which urges us to try foods we don’t usually eat, encourages us to ask questions, play with our food and even slouch in our chairs! Why? Why indeed!

Long, long ago, there was not enough food to share in the land of Canaan which today is called Israel. The Israelites of Canaan traveled for many days to live in Egypt where there was plenty of food. Welcomed as honored guests by the Egyptian king, the Pharaoh, they ended up living in Egypt for many, many years where they became excellent farmers and shepherds. How many years? Over 400 years!

After all those years, a new Pharaoh was unhappy that the Pharaoh from long ago let the Israelites stay in Egypt. The new Pharaoh was afraid there were so many Israelites that they would become the rulers over the Egyptians, when all they wanted was to raise their flocks. When Pharaoh needed buildings and statues to be built for his cities, he decided the Israelites should do all the work. They became his slaves! Making bricks and pulling heavy loads, they worked for hours and hours under the hot sun with very little food and water.

By adding more and more cruel burdens, Pharaoh made life extremely hard for the Israelites. The Torah teaches us that God realized it was time to get them out of Egypt. Knowing that the Israelites would be more likely to listen to one of their own, God picked a young man named Moses by speaking to him from a burning bush! Amazed that the bush burned without turning to ash, Moses knew God was strong, but he did not feel strong enough to be a hero. God told Moses that his brother Aaron would help him.

Moses and Aaron appeared before Pharaoh to deliver God’s message: “Let my people go!” Pharaoh answered, “No!” God caused Moses’ walking stick to become a snake but Pharaoh just made the slaves work harder. Since God wanted to change Pharaoh’s mind by showing him what it felt like to be treated badly, God created plagues like frogs and darkness. During each plague, Moses and Aaron said, “Let my people go!” Terrified, Pharaoh said, “Yes!” but he changed his mind and said, “No!” when each plague stopped.

Finally, the last plague was so terrible that when Moses and Aaron said “Let my people go!” Pharaoh answered “Yes!” and meant it this time. Or he thought he meant it until after the Israelites left. Pharaoh asked, “Who will build my cities for free?” He and his army chased after the Israelites to bring them back. Thinking that it would be easy to catch them at the shore of the sea, the Egyptians were astonished to see the Israelites crossing through on dry land! God had caused the water to separate – the biggest miracle yet!

Moses, Aaron, their sister Miriam and all the Israelites sang and danced to celebrate their escape from slavery. Today, we gather around our Seder tables to celebrate that great escape by retelling the story and imagining that we lived through the miracles!